For 21 years between 1839 and 1860, the Opium Wars saw thousands of Chinese people flee to begin a new life in the US – where they soon settled in cities along the west coast. 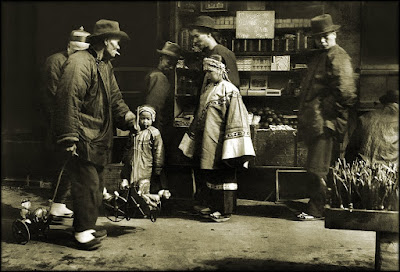 The Opium Wars were two clashes in China in the mid-nineteenth century between the powers of Western nations and the Qing line. The Qing Empire controlled China from 1644 to 1911/12. The principal Opium War (1839–42) was battled between China and Britain, and the second Opium War (1856–60), otherwise called the Arrow War or the Anglo-French War in China, was battled by Britain and France against China. For every situation the remote forces were triumphant and increased business benefits and legitimate and regional concessions in China. The contentions denoted the begin of the period of unequal settlements and different advances on Qing power that debilitated and eventually topple the line for republican China in the mid twentieth century

These rare images show family life inside the original San Francisco Chinatown before it was destroyed by an earthquake and a series of fires in 1906. For 21 years between 1839 and 1860, the Opium Wars saw thousands of Chinese people flee to begin a new life in the US – where they soon settled in cities along the west coast. The area later became known as Chinatown and was soon visited by photographer Arnold Genthe, who had emigrated from Germany to tutor a wealthy family. However, when his contract ended, he decided to stay and open a studio. Fascinated by the Chinatown area and its people, Genthe took hundreds of images of the area using a small camera that he stored in a bank vault. At 5.12 am on April 18 in 1906, with a magnitude of 7.8, an earthquake and a series of fires rocked San Francisco and brought Chinatown down – at the time, 375 deaths were reported in the city because hundreds of fatalities in Chinatown were not counted. The total number of deaths is still uncertain, though it is estimated to be roughly 3,000. Although Genthe’s studio did not survive the extreme earthquake, the vault did – making his photographs some of the few that remain prior to the disaster. The photographer rebuilt his studio soon after the disaster and continued taking images of the area until 1911, when he moved away to New York. His images were later compiled into a book: Their First Photograph, Chinatown.