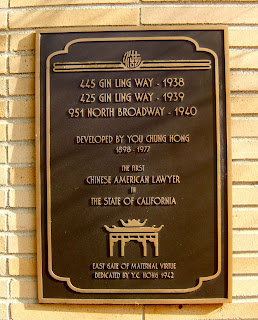 Among many other things, You Chung Hong, one of the leading Chinese American Californians of the generation born around 1900, was active in Republican politics. It’s probably safe to suppose that if he were alive today, the Los Angeles immigration attorney would not be backing Donald Trump for the party’s presidential nomination.
“Y.C. Hong: Advocate for Chinese-American Inclusion,” which opens this weekend at the Huntington Library, Art Collections and Botanical Gardens in San Marino, is drawn from Hong’s papers, photographs and correspondence, donated to the Huntington years after his death in 1977 at age 79.
Curator Li Wei Yang chuckled recently when asked whether he feels lucky that Trump proposes rounding up millions of Mexican immigrants and sending them away. It lends a certain immediacy to an exhibition about Hong, who took more than 7,300 cases defending the right of would-be immigrants from China to come to the United States to join spouses or parents who already were here.
Hong was born in San Francisco in 1898, the son of a Chinese immigrant who, like many others, came to America to build railways through the West.
In 1923, while studying law at USC, Hong became the first Chinese American to……..
Read More