Paris has several Asian neighborhoods (French: quartiers asiatiques), the largest being located in the 13th arrondissement (13th district). Chinatown Paris is bounded roughly by Avenue de Choisy, Avenue d’Ivry and Boulevard Masséna, and includes the Les Olympiades complex. The area was originally an ethnic Vietnamese district, when Vietnamese refugees arrived in the area in the 1970s following the Vietnam War. Later waves of immigrants included ethnic Chinese from Indochina, Laotians and Cambodians, who also fled their countries following their communist takeovers.

Although a large number of the earlier Vietnamese immigrants integrated into French society shortly after their arrival and moved to other areas of Paris and the surrounding Île-de-France region, they still maintain a strong commercial and cultural presence in the area. Within this neighborhood, commercial activity is dominated by Chinese and Vietnamese businesses, with a smaller number of Laotian and Cambodian establishments. Roughly 50,000 people live in the district, with a majority being Chinese, and significant Vietnamese and Laotian populations. The flagships of the Tang Frères and Paristore Asian specialty supermarkets are located close to each other in Chinatown.

Before WWII, parisian Chinatown was based in a real Asian community, located in marginal and poor areas, formed through successive waves of migration, the first of them during the 1900s in the Arts et Métiers quarter around rue au Maire, then in the now disappeared Chinatown of Gare de Lyon. Since the 1920s, luxury goods shops and restaurant settled as well in the La Madeleine-Opera district, where is now located the Japanese quarter of Paris around rue Sainte-Anne, and in the Quartier Latin near place Maubert, where some Vietnamese restaurants can still be found.

Another Chinatown area has settled in Belleville, Paris. There is a large number of Far East restaurants, especially on Rue de Belleville and on Rue Civiale. Wikipedia 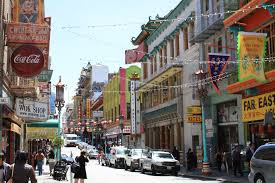 The second largest community in France, essentially Chinese and residential, is located in the new town of Marne-la-Vallée eastward of Paris, notably in the communes of Lognes, Torcy and Noisy-le-Grand. (Source: Elisabeth Brunel,”Revue européenne de migrations internationales” 1992). Wikipedia