Heretofore operating illegally on East Broadway, GD Bus Tour Inc. is now looking to legitimize its intercity bus company. They’ve already signed a lease on a store at 125 East Broadway (sign is up), and plan on continuing twice-a-day service to Orlando, Florida. The stop will piggyback off the M9 there. 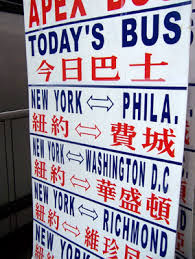 Its owners appeared before Community Board 3 last week for the green light, so to speak. As with anything Chinatown bus-related, emotions were high.
GD Bus has one pickup (7pm) and one drop-off (noon) each day; layovers are allegedly in Brooklyn. On paper, this doesn’t seem like it would have much of an effect on locals. The Transportation subcommittee even channeled that sentiment when members claimed that their operation isn’t as burdensome as, say, Yep Tour, noting that it’s “just a drop in the bucket.” However, that comment didn’t go over too well. Emma Culbert, spearheading the charge vis-a-visSPaCE Block Association, retorted that the “bucket is already full.”
Board member, and local activist, Trever Holland then showed a video illustrating the cluster*&^*  of humanity in which GD Bus operates. Boarding the M9 is nearly impossible, especially for the handicapped and disabled, and requires middle-of-the-street access. Plus, there is also little to no queue management, something the……..Read More