THE 8 CHINESE DISHES YOU SHOULD EAT IN CHINATOWN 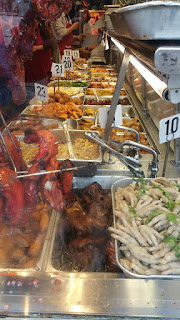 Forget the General Tso’s chicken, chop suey, beef & broccoli and skip the fortune cookies, please.  Chinatown’s are gastronomic wonderlands. Skip the tourist food and explore the real eats. Where to start may seem overwhelming to some but worry not. You can start with these, the 8 most popular dishes you should eat in Chinatown:

A Hui man (Mao Baozi’s (马包子, 1870-1955) who sold the hot soup noodles with meat in the city of Lanzhou amid the Qing Dynasty is credited with inventing the dish the way we know it today.

A staple in Taiwanese-style bubble tea houses in most Chinatown’s around the world.  Beef noodle soup is considered a national dish in Taiwan. Some noodle shops carry the title of 兰州正宗拉面 (authentic Lanzhou hand-pulled noodles)

Beef Noodle spread when Chinese soldiers from Sichuan province fled to Taiwan in 1949.

Taiwanese consider the beef noodles in Hong Kong to be saltier and oilier.

Shanghai-style dumplings, filled with hot broth and meat. Xiaolongbao, a most loved of foodies around the world, is thought to have originated in Shanghai and the area just to the north of it in the south Jiangsu province in the nineteenth century.

Legend has it that these incredibly famous soup dumplings that started as a test by a cake shop proprietor in Nanxiang who chose to experiment with his famous steamed bread.

It is perfectly fine to lift each gem with your chopsticks, place on a spoon, bite a piece, slurp, then eat.


One of the classic dishes of China, dating back to the Qing Dynasty. Sweet and sour pork is included in Zhejiang cuisine

The style of Shandong-cuisine is much more popular than the others.

How to Cook Sweet & Sour Pork

You can find Sweet and Sour Pork all over the world. The taste and flavor will vary from restaurant to restaurant, the same way it would vary in different regions or villages in China. In America, it’s sweeter than that in China.

on the menu.  Kung Pao Chicken is considered a part of Sichuan food, yet nowadays you can get the dish at most eateries in China, and practically every Chinese eatery outside it. Despite that, it is a very real traditional Chinese dish. Mapo (/maa-por/) tofu is bean curd served in a chili-and-bean-based sauce, which is usually a thin, oily, and bright red suspension, and often topped with minced meat, usually pork or beef. Seasonings include water chestnuts, onions, other vegetables, or wood ear fungus. The taste of mapo tofu is fittingly described as numbing, spicy-hot, fresh, tender and soft, aromatic and flaky. Mapo tofu is easy to find outside of China. Learn how to cook Mapo Bean Curd.

Originating from northern China, wontons are similar to dumpling and are usually served in soup. Wontons date back to the Han Dynasty

over 2000 years ago. Wontons are crescent-shaped and were originally used in activities of sacrifice and worship. During the Winter Solstice Festival

of the  Song Dynasty (960 － 1279), shops would close temporarily while every family made wontons as sacrificial offerings for ancestor worship. Afterward, all the family members shared the wontons.

Beijing (northern China): wonton.
Sichuan: Sichuan people like spicy flavor, so there is a famous dish named “Red oil (chili-made soup) 红油抄手/hóng yóu chāo shǒu”.
Hubei Province: it is called “boiled dumplings (Shuijiao)” in Wuhan region, and called “Baomian /包面 bāo miàn” in other regions of Hubei.
Anhui Province: Baofu /包袱bāo fú.
Jiangxi Province: known as “Qingtang/清汤 qīng tāng”, also “Baomian” and “Yuntun”.
Guangdong Province: in Chinese, the two words of “wen tun” were infrequently written, and in the past, few people knew how to write them. So “wen tun” was generally written into “yunton” (in Cantonese), where its English name “wonton” originated from.
Fujian Province: known as “Bianshi /扁食biǎn shí”, “Bianrou /扁肉biǎn ròu”. The of meatfilling is usually hammered together by mallet.

are a kind of famous tradition northern Chinese dumpling, commonly eaten across Eastern, Central, Southern and Western Asia. Though considered part of Chinese cuisine, jiaozi is often eaten in many other Asian countries.

According to research, the dumpling originated in the Northern Dynasty as moon-shaped ravioli and in the Southern to Tang Dynasties as “dry meat Jiaozi, dating from more than 1,400 years ago.

“There are two things you must do in Beijing: eat Beijing Roast Duck and see the Great Wall.”

is a celebrated dish from Beijing, appreciating world acclaim, and considered as one of China’s national dishes. Peking duck is relished for its crispy skin.

The dishes listed above are a good intro to some traditional Chinese dishes.
Tasting and learning about them and will get you excited and open you to try new things.
Enjoy!