Chinatown (Chinatown, “Chinese City”) in San Francisco is the most extensive settlement of Chinese outside of Asia. This is the oldest Chinatown in North America. According to average estimates, the Chinese population in San Francisco is more than 150,000 people, and this number is constantly increasing.

This is a wonderful place for travelers who want to plunge into the “real China” while in the United States. It is here that you can enjoy the indescribable atmosphere of a different culture, and personally feel and experience the change of traditions of different countries, shared by only a few steps.

You can also try the national dishes of Chinese cuisine. However, it is worth bearing in mind that such popular delicacies as cookies and cakes with fortune-telling are not at all part of the national wealth of China, and in the country itself these products are not known.

Every year in mid-September, the population of Chinatown solemnly celebrates the traditional Chinese holiday – the Autumn Moon Festival (i.e., the “Mid-Autumn Festival”).

How it all began

In the nineteenth century, many immigrants from China arrived across the Pacific to the United States of America. Most worked for large corporations, which at that time needed cheap labor. For example, such workers were required during the construction of the First Transcontinental and Central Pacific Railways.

In the 1870s, massive unemployment in San Francisco exacerbated tensions among ethnic groups. This led to the fact that later, in 1882, a special “Act on the exclusion of the Chinese” was adopted. The population of Chinatown fell, however, after the Second World War, the Chinese were given the opportunity to immigrate to America.

In 1906, an earthquake occurred, which almost completely destroyed the Chinatown in San Francisco. Despite proposals from conservatives to move Chinatown away from the center, the district was rebuilt at the same place during the reconstruction of the city.

Chinese District is a twenty-four quarter in the heart of the city, where a large number of Chinese live compactly. However, the population of Chinatown is only a fraction of the immigrants from China who settled in San Francisco. Chinatown can easily be called the political and cultural center of a community.

The main street of the district is named Grant Avenue. Chinatown begins on “Bush Street” (“Bush Street”), there are also symbolic gates, inviting guests to look into the magical world of Chinese culture. On either side of this gate are two stone guard lions.

Passing through the gate, you get into the oldest part of the city. This place is the most densely populated area in San Francisco, and therefore it is always very crowded here. Here you can find everything your heart desires: Bush Street has many bakeries, tourist shops with a huge number of cheap oriental souvenirs. There are also many shops with a variety of spices, and the appetite that has developed from the aromas will offer to pacify three hundred restaurants in Chinatown.

California Street) and Grant Avenue. However, those who want to plunge into the exotic “real China” should go through the neighboring streets, such as Waverly Place. This is where the true Chinese culture begins, here the American speech subsidies.

If you decide to visit San Francisco, be sure to take a walk in the famous and magnificent Golden Gate Park. 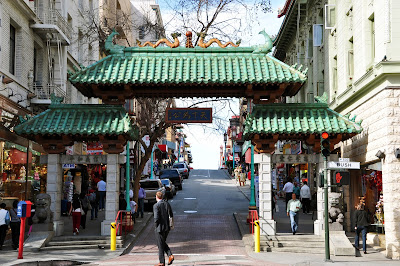 1848 The first Chinese emigrants to California arrived in the brig Eagle, from Hong Kong, in the month of February, 1848 — two men and one woman
1849 Gold discovered at Sutter’s Mill near Coloma
1853 Old St. Mary’s Church erected. Presbyterian Church in Chinatown is the first Asian church in North America.
1859 “The Chinese School” was created. Chinese children were assigned to this “Chinese only” school. They were not permitted into any other public schools in San Francisco.
1870 California law passes against the importation of Chinese, Japanese, and “Mongolian” women for the purpose of prostitution
1870 Anti-Chinese ordinances are passed in San Francisco to reduce their housing and employment options.
1873 Chinese Congregational Church and Chinese United Methodist Church are established
1875  Page Law bars Asian prostitutes, felons, and contract laborers
1880 US and China sign arrangement giving the US the privilege to restrain however “not completely disallow” Chinese migration. California’s Civil Code passes hostile to miscegenation law. First Chinese Baptist Church established.
1885 The “Chinese School” was renamed the” Oriental School,” so that Chinese, Korean, and Japanese students could be assigned to the school.
1900 Tung Wah Dispensary opens in Chinatown
1906 San Francisco earthquake and fire. True Sunshine Episcopal is established.
1908 Chinese Chamber of Commerce formed.
1911 Chinatown YMCA is established
1916 Chinatown YWCA is established
1921 Chinatown Public Library opens.
1924 The “Oriental School” was renamed Commodore Stockton School. Alice FongYu was the first Chinese teacher. Students were barred from speaking Chinese in school or on the playground.
1925 The Nam Kue School is built. Tung Wah Dispensary is relocated and renamed Chinese Hospital.
1927 The Chinese Playground is built
1940 English-Language Newspaper for Chinatown
1963 Chinese Historical Society of America founded
1966 First Miss Teen Chinatown Pageant
1982 First Chinese American women seen regularly on national television
1987 Chinese Grace Church is established.
1988 San Francisco Evangelical Free Church is established.
1998 Commodore Stockton Elementary School was renamed Gordon J. Lau Elementary School in honor of the late civic leader and advocate for the Chinese community
2011 Mayor Edwin Lee elected as first Chinese American mayor in San Francisco’s history